Discover how colour can alleviate visual discomfort and help with dyslexia.

Visual stress is a term used to describe visual discomfort and perceptual distortions in the printed text, suffered by many people who struggle to read. The condition is estimated to be present in about 40 % of poor readers and in 20 % of the general population in varying degrees.

Coloured overlays can improve reading speed and accuracy. They can enable longer periods of reading free of discomfort. When they do, it is an indication that the individual may benefit from Precision Tinted Lenses. The lenses are prescribed using specialist equipment called a Colorimeter.

Recent imaging studies suggest that the symptoms of visual stress may be caused by a hyper-excitability of the visual cortex in the brain. The problem may be linked to photophobia and migraine.

Dyslexic individuals are more likely to experience visual stress than others, although visual stress is quite distinct from dyslexia and the phonological difficulties with which dyslexia is usually associated.

They have to work harder than their peers to achieve the same outcomes, often with extra tuition. Many could be helped by overlays or Precision Tinted Lenses. It is therefore essential that every child who struggles to read is referred to a vision practitioner who can undertake a full eye examination and check for the presence of visual stress.

A diagnostic process has been designed that allows for the identification of visual stress, thereby distinguishing it from other barriers to reading. This is achieved by the simple selection of an optimum coloured overlay placed over the reading matter. 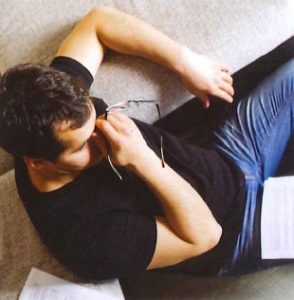 The Signs and Symptoms of Visual Stress

Colour can make a significant difference to the quality of life for migraine sufferers.

Both the brain abnormality and the sensitivity are reduced by Precision Tinted Lenses. Other coloured lenses are without beneficial effect. Occasionally the Precision Tinted Lenses prevent migraine attacks. More usually they enable patients to continue their daily activities despite attacks and to cope in environments that would normally make them seek out dark rooms.

The study concludes that normalisation of cortical activation in migraines with Precision Tinted Lenses, suggests a neurological basis for the therapeutic effect of the lenses in reducing cortical hyper activation.

Other neurological conditions have been shown to benefit from the use of Precision Tinted Lenses. Research has shown that reading can, in some cases, improve significantly in Autistic spectrum individuals with the use of a precision colour. Acquired brain injury sufferers have also, anecdotally, shown benefits with a chosen colour. This work is ongoing.

Acknowledged world-wide as the defining colour system that can provide one hundred thousand colour combinations. 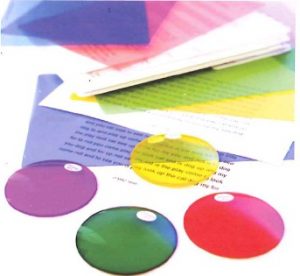 The Intuitive Colorimeter is used extensively by vision professionals in the UK and throughout the world. Under the direction of our Optometrist, we guide patients in selecting an ophthalmic tint that reduces discomfort and perceptual distortion. An examination with the Colorimeter lasts about 20 minutes and enables the effects of hue, saturation and brightness to be explored systematically and efficiently whilst the eyes remain colour adapted. With the help of proprietary software, tinted trial lenses are then combined to assess the clinical benefits of the chosen colour under conventional lighting. The shades available enable the tint to be precisely tailored to an individual’s needs. The prescribed tint is reproduced precisely in specially designed laboratories.

The system also allows for alternative colour combinations for use under different lighting conditions and includes UV and Blue Light transmissions. It also takes account of the effects of colour on traffic signals. 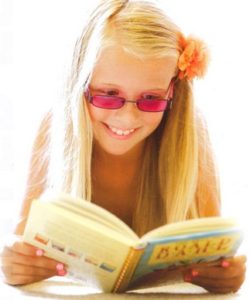 Precision Tinted Lens prescribed from the Colorimeter are reproduced precisely from specially dedicated laboratories. The core lens material used in the process is the safe CR39 plastic (allyl diglycol carbonate). The Precision Tinted Lenses are dyed to a degree of accuracy not found in ophthalmic tinting.

They are scanned using a calibrated spectrophotometer linked to a Medical Research Council software programme ensuring accuracy of the prescribed colour. Any requirement for refractive prescription can be incorporated in the tinted lenses. Each pair of prescribed Precision Tinted Lenses has an accompanying Certificate of Authenticity.

An essential aid for vision professionals as the first step in identifying Visual Stress.

Coloured Overlays are used widely both in the classroom and by vision professionals in practice. Moderate to significant improvements in both reading rate and accuracy are not uncommon when the optimum overlay is prescribed. Overlays are coloured sheets of robust transparent plastic that are placed over a page of text when reading. The assessment pack consists of 12 overlays of different colours. The colours have shades that differ systematically. The variety of shades is sufficient to provide a shade optimal for each individual. Assessment involves the presentation of each overlay in turn for comparison with others placed beside it. The assessment can be carried out by our specialised vision professional.

The Overlay Testing Set includes the Wilkins Rate of Reading Test, which measures reading speed independently of language comprehension. It quantifies the improvement in reading. 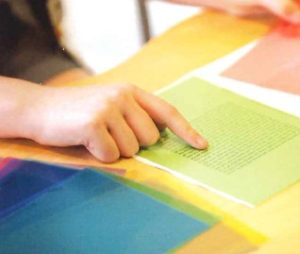 In March 2010 it hosted the first International Science Conference at the Royal Society in London welcoming science and education presenters from around the world, whose research contributes to this area of science. The Institute’s on-going activities include highly rated training courses for teachers and vision professionals throughout the UK and the sponsoring of regular international lecture tours that include Australia, the Far East, Europe and the US.

Visual Stress is acknowledged by the British government as a component in the failure of some children to access literacy skills. They have supported information on the use of overlays to all schools throughout the UK. The lloC supports and sponsors the strong lobby group who liaise regularly with government ministers to seek extended funding for the Precision Tinted Lenses for children.